I was not signed up for this race until very recently, but knew I wanted a longer, harder than training effort run prior to VT 100k.  This race seemed right up my alley; low key, not technical, mostly shaded, reasonably close to home and put on by Amy Rusiecki.  I also needed my volunteer hours for VT and since this race had runners running upwards of 100 miles, there was plenty of time in the day and night after I ran to get those hours in.

I knew the course was rolly, but no big hills, so it seemed reasonable to think running under 4 hours would be doable.  I had a stretch goal of 3:45 in my head, but didn't really know what to expect until I got on course.

The race started at 6am and the course runs out on River Road for 7.75 miles to a turn around and comes back.  I would do this two times for 50k.  When thinking about the double out and back, it was just a matter of running the first out and back reasonably relaxed and then trying to run a bit faster the 3rd leg and then hoping to finish strong coming back to the finish.

The race starts and the first little bit is downhill.  One dude went out a tad ahead of me, but we settled into pace pretty quickly.  I was initially thinking 7:30 pace, but pretty early on the GPS was reading around 7:15s, so I just went with it, making sure I felt easy and not really pushing any of the small ups or downs along the way.

I felt pretty good separation after a couple miles, I took advantage and jumped off the trail for a quick pit stop and then got back into my groove.  The last part of the road is a more exposed area, which got pretty warm later in the day, but at this point it felt nice to be in an opening at is was breezy and still a little overcast. My first 7.75 was 54:33

The trip back was pretty uneventful.  I started seeing the people that were heading out to the turnaround, which made the race slightly less lonely, I waved and said good job to everyone each time we passed.

My main goal for the journey was to stay relaxed and easy.  At this part of the run it was easy to get too fast.  Far enough into the run that I was all warmed up and feeling good, but plenty of race left that I could do some serious damage if I got carried away.

I arrived back at the start/finish area and made a loop around the turnaround bush in 53:44, topped off my bottle with some Coke and down the hill I went to start my last out and back.

The route on the way out was generally more down hill than the way back.  I took advantage of that on the last out lap.  I Wasn't trying to run much faster than the previous section, but I guess I started to smell the barn so to speak.  That lap was 52:15.

I again just topped off my bottle quick and got back to work.  The exposed area was a bit warmer now, but it was definitely easier running then further up the course where there were generally more rocks etc.

I would guess that somewhere around 5 miles ago I finally felt like I was working a bit harder than I had been, but I never felt like I was struggling too much.  I was pretty sure I would be under 3:40 at this point and just ran hard all the way though, finishing in 3:34:55.

So, this was a great effort and I actually passed though the marathon split faster than Boston....even the BS GPS marathon split.

The rest of the day was spent hanging out at the 7.75 mile turnaround aid station volunteering until around 9:30 pm.  It was a beautiful day to be outside, but I was super happy to get back to the hotel and get some sleep.

It took me a while to actually finish writing this, but now a few weeks later, training has still been going well.  Since Chesterfield I have run two 25+ mile runs and a 20 mile run, with two good solid training weeks.  This week will be a back off week and then I will start the final push towards VT! 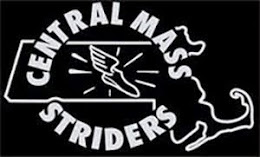